The quest for the ideal city...

Are cars incompatible with modern cities?

The quality of our lives very much depends on city traffic conditions -which may vary dramatically from country to country.

I was once talking to a Swiss guy that I met in a conference (you know, during the best part of the event, the cheese and wine party) and instantly took the opportunity to praise his country for taming noises and enjoying a controlled and civilised city environment. Although he momentarily agreed, he invited me to visit his apartment and try to raise my voice after 10 pm… He reassured me that his neighbours would immediately call the police… (no thank you, I prefer to stay in Greece!).

I am using Switzerland as an example since the Porsche 911 range inevitably acquired a water-cooled engine in 1998 as the company could not pass the Swiss noise regulations with that unforgettable air-cooled 6-cylinder music box….

Things don’t have to go to extreme lengths though… Although driving in the centers of Athens or Jakarta might not be a pleasant experience, there are some places that magically combine mass transportation and car-free city centers with restricted traffic.

Italy is such a place as I recently discovered after visiting Torino, Genova, Florence and Bologna. For example, there’s absolutely no reason to drive in Via Roma as long as you can safely park your car in an affordable underground parking at the heart of Torino.

Ditto, it would be naive to drive a car in Bologna’s medieval city center as the unique downtown aroma and the beautiful landscape simply discourage the idea of using a motor car…

Florence is no exception to that rule as only taxis and garbage trucks go around the empty downtown roads like ghosts… Even in Genova, a busy port with a bizarre and sometimes grotesque architectural combination of old and contemporary buildings, cars are a very rare sight in the old section of the city…

Although I am in love with automobiles, I would prefer to live in a car-free city full of bicycles, with a metro line and a frequent bus service in order to commute from A to B.

I would nevertheless choose to take my rear-wheel drive car and vanish for a few hours in a race track or some twisty roads in the nearby mountains!… I caught this cute red 500 hiding in a small street at the port of Genova. Although illegally parked, nobody would complain as the Cinquecento is always welcome! 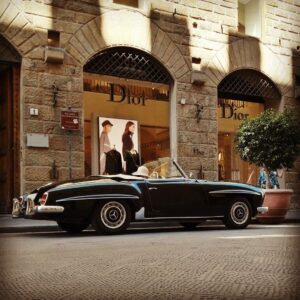 The story went exactly like this: the lady with the big round beige hat parked her black 190SL in style. She walked away with complete confidence and left the car behind -although on-street parking was strictly forbidden!… Everybody rushed to take a photo or two -luckily, I was one of those! It seems that a rare vintage car can bypass the Italian traffic rules… No offence, a rare 190SL can add drama to the beauty of a romantic city, therefore, we would definitely forgive that pretty lady and thank her for spicing up our daily life! Palazzo Reale di Torino… The presence of the Carabinieri car sounds like a paraphony, however, one would certainly need some kind of security at the heart of this lovely city! The historic center of Genova has an extended car-free zone! 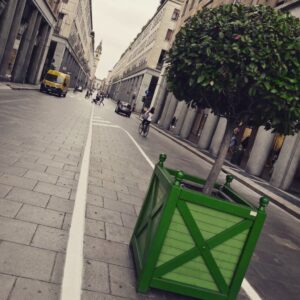 Via Roma, Torino: everything looks and feels “green” in this restricted-traffic zone! You can freely enjoy the beauty of Bologna while safely walking around the main streets of such a beautiful medieval city-center. Looks like a car-free paradise!.. 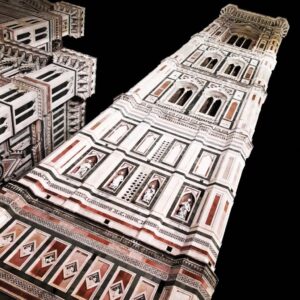